I study modern interpretations of indigenous cartography, such as counter mapping, which maps away from dominant power structures and colonial hierarchy. This means story and narrative should not be visually separated from their geographic counterparts.
Colonial cartography serves as a weapon of intent, the intent being to carve up and redistribute occupied land with little to no acknowledgment of the centuries-old relationship between that land and its inhabitants.
The Cherokee Nation, one of the indigenous peoples of the Southeastern United States, has held a working relationship with the earth for thousands of years. They taught themselves how to shape, decorate, mold and fire clay deposits, also known as Georgia red clay, from the Blue Ridge Mountains and surrounding areas for utilitarian, ceremonial and decorative purposes. The term “Elaya diyi” means red-earth place in the Cherokee language, deriving from ela (earth) and wadi (brown-red). 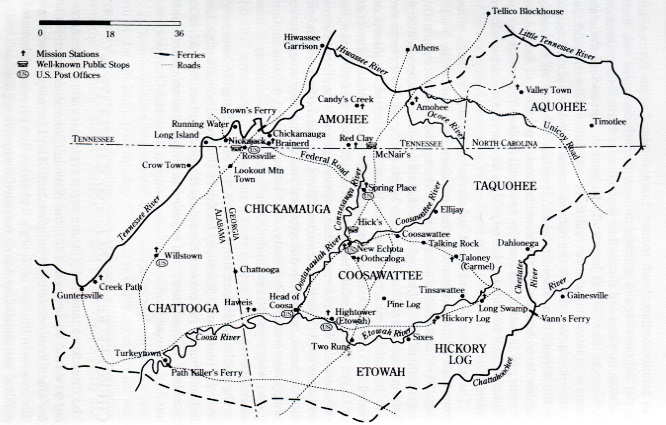 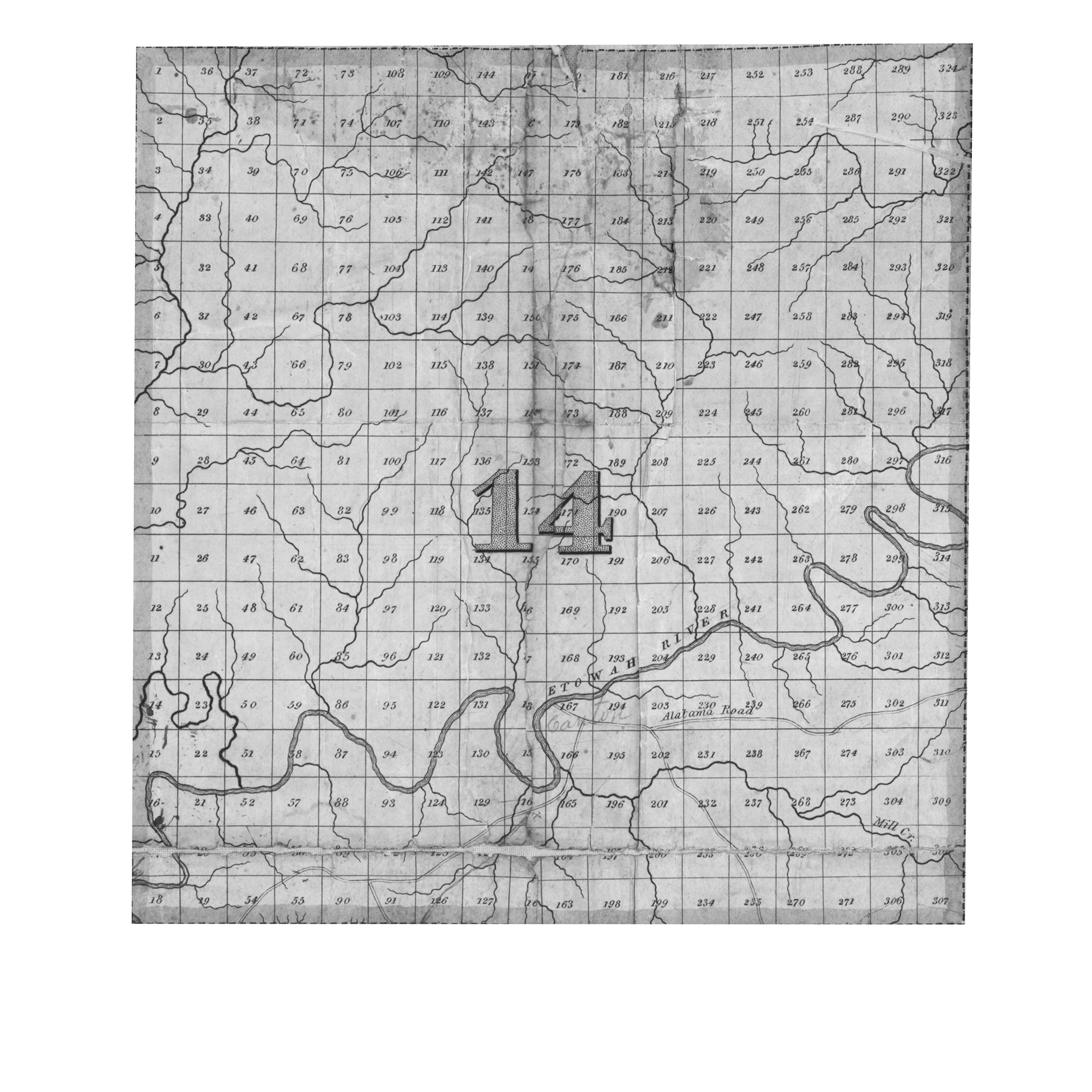 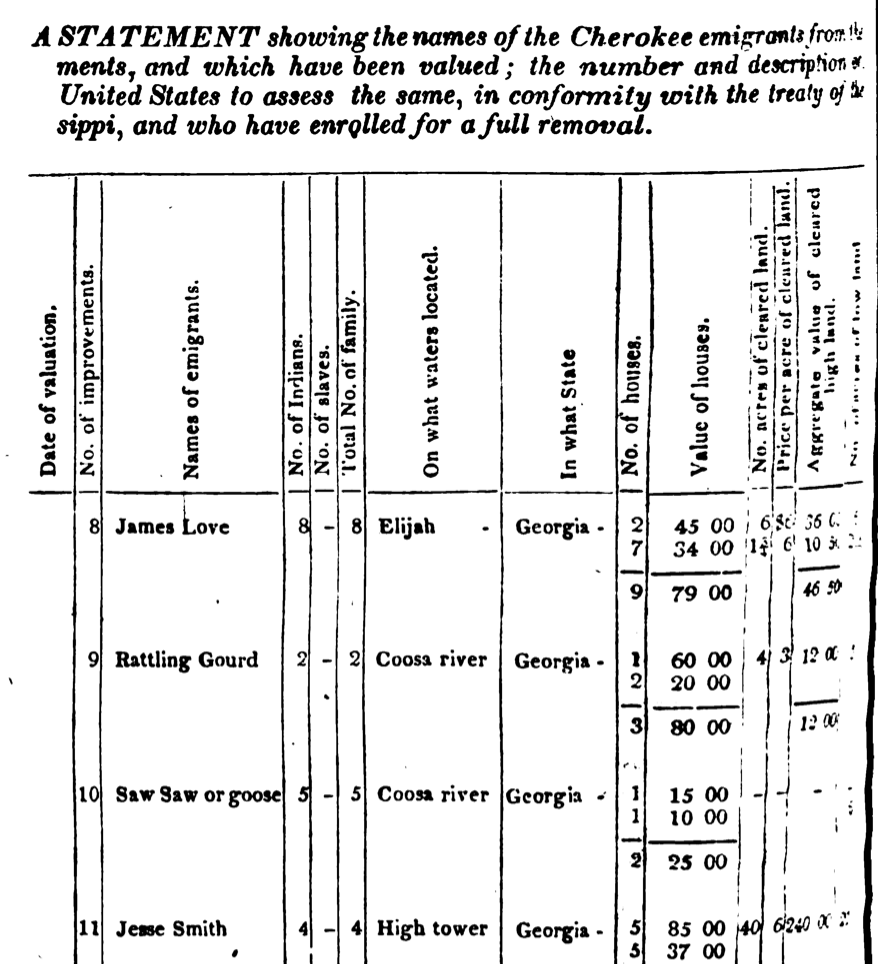 Georgia surveyors’ notes document the unique cultural landscape of the territory they intended to steal. This countermap uses the same archival material to critically examine Georgia’s colonial past. 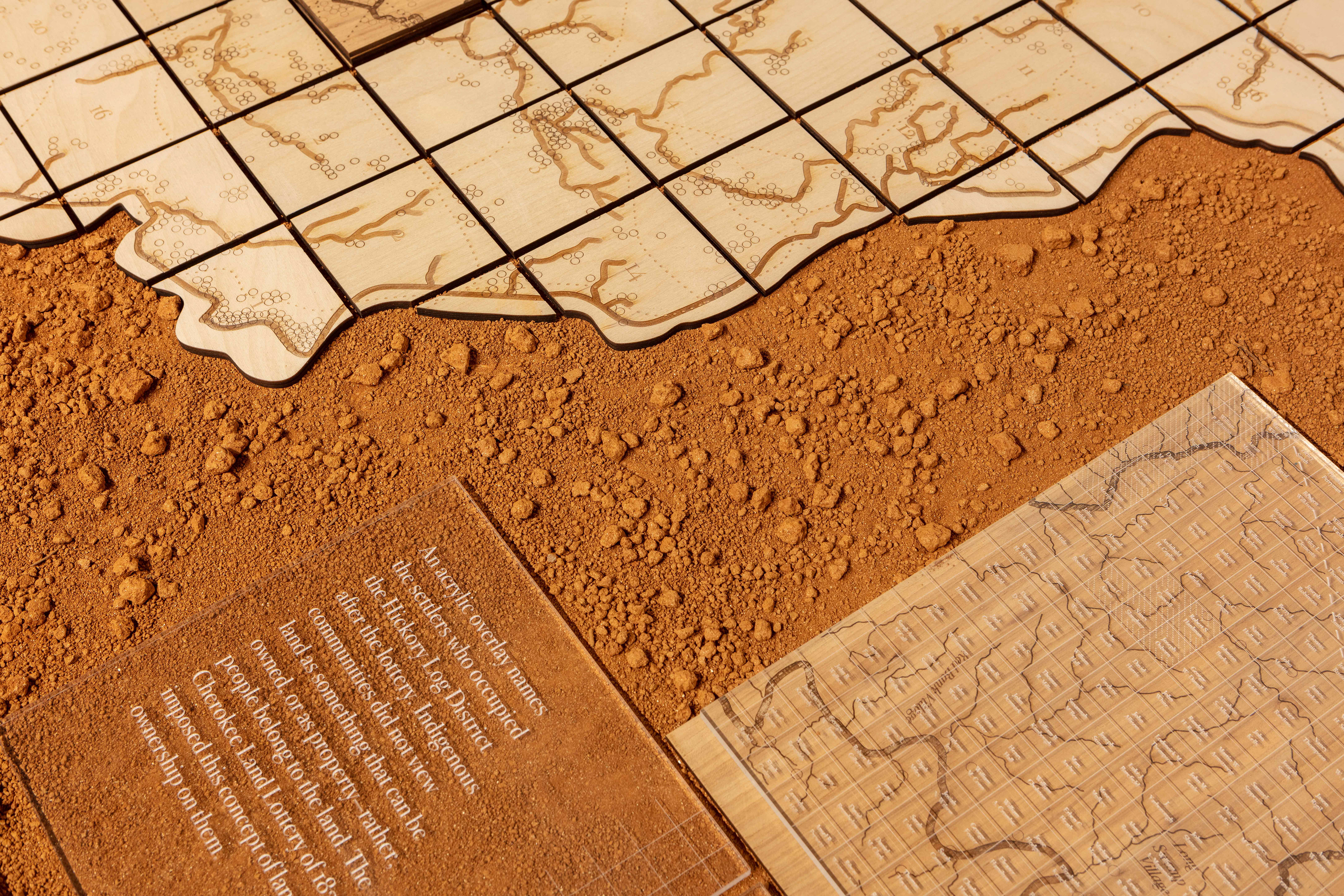 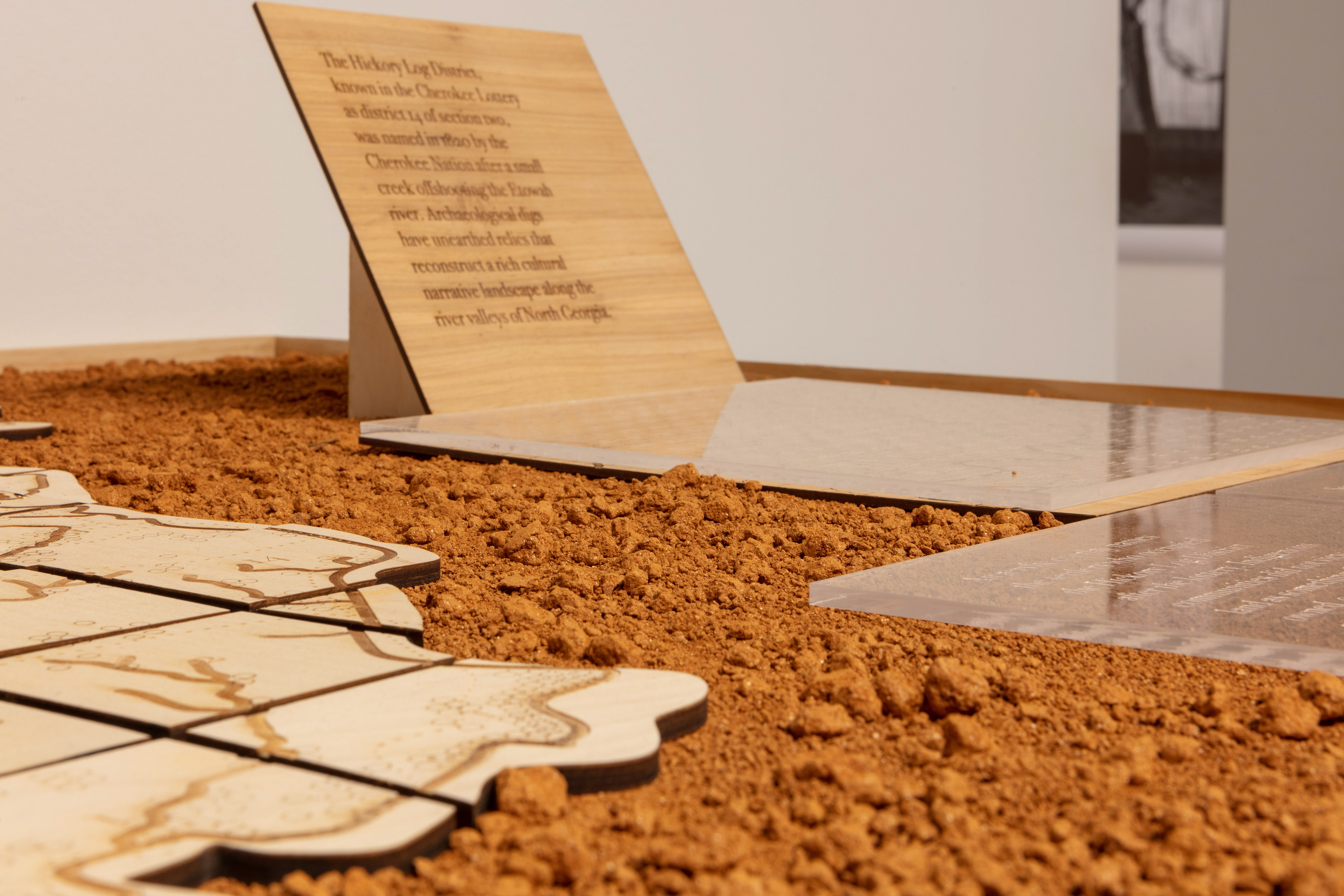 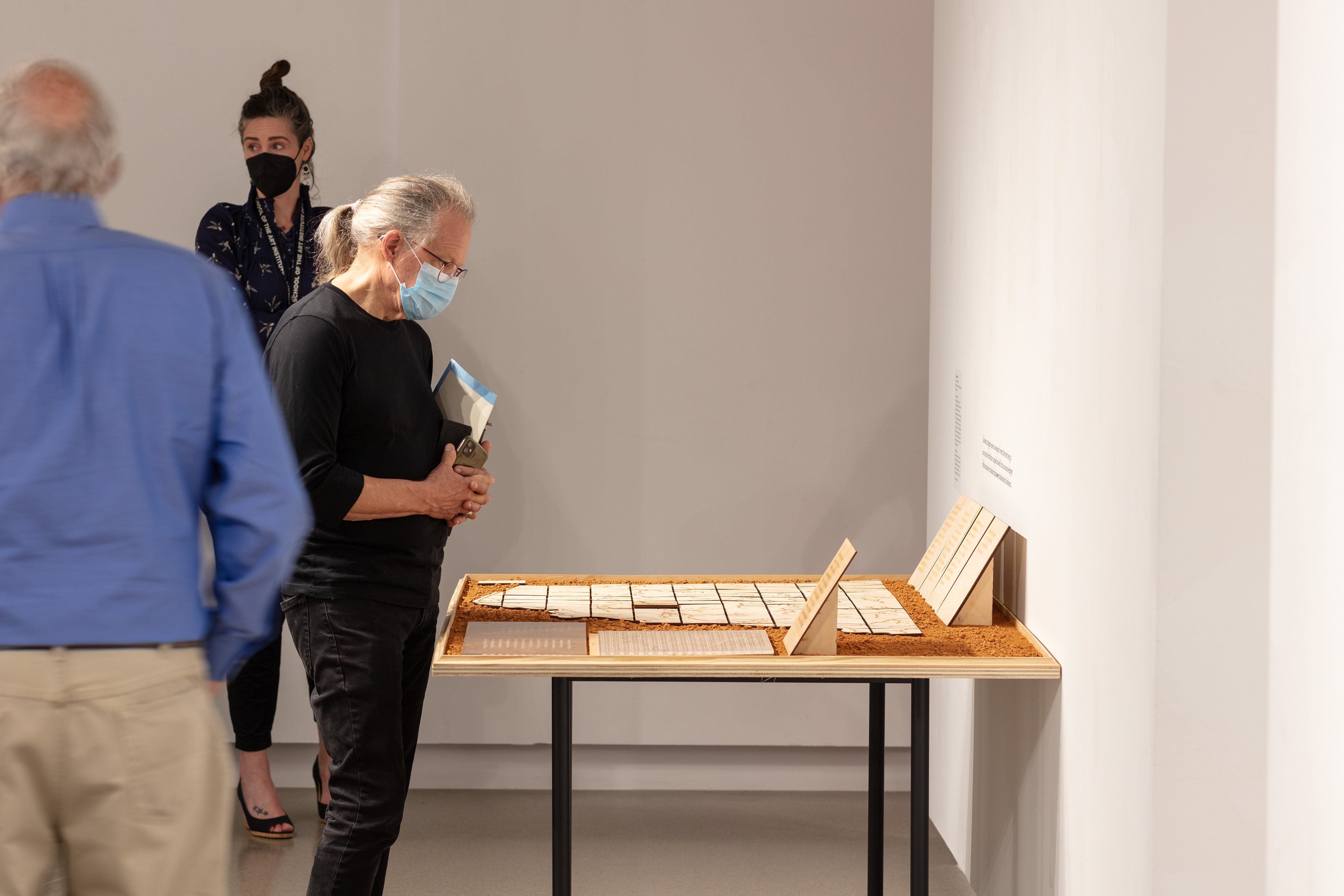 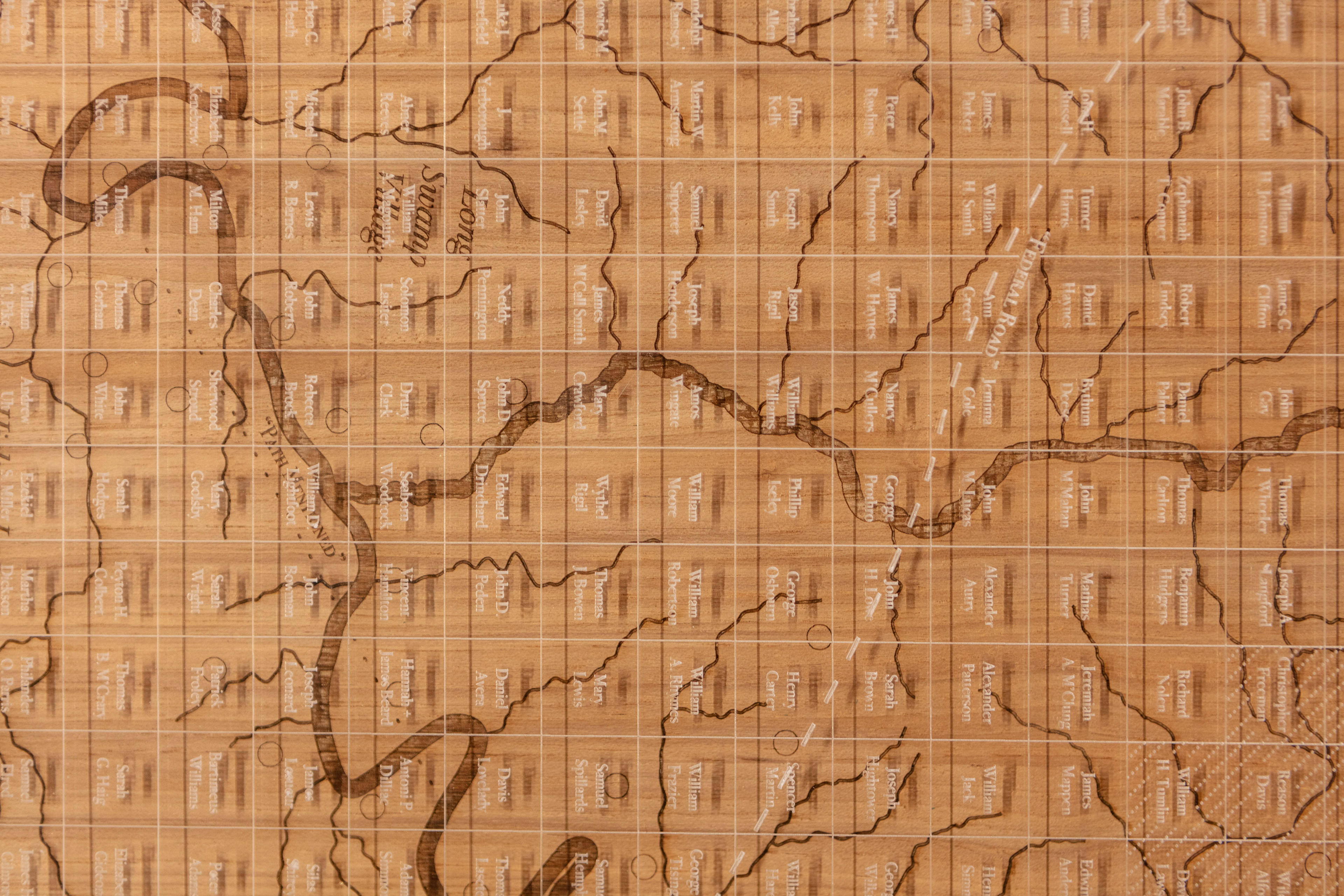 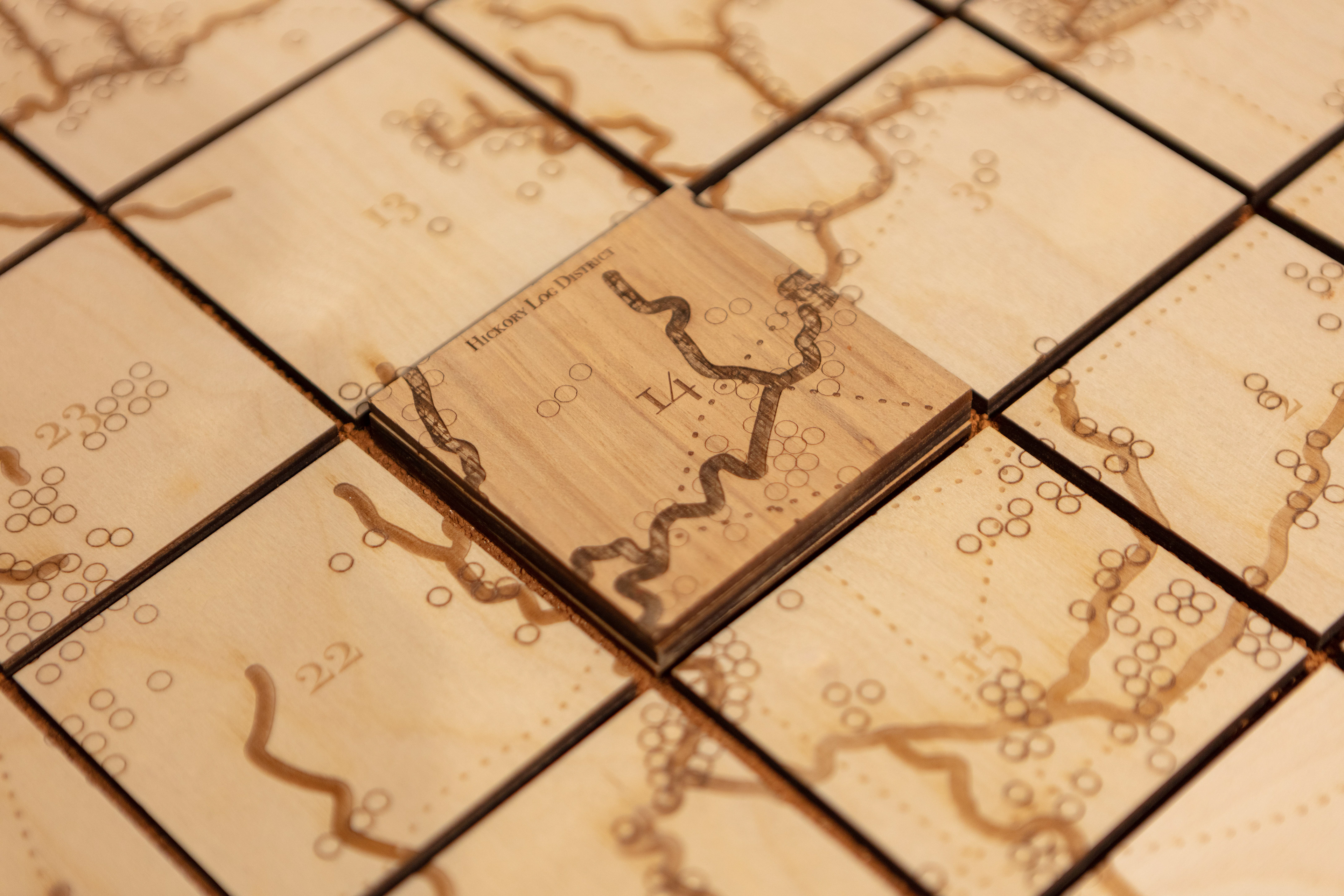 Land improvements (etched circles)
In 1831, Georgia authorities surveyed land under the jurisdiction of the Cherokee Nation, cataloging evidence of prior life on the land. This evidence includes clearings of land, constructed buildings, and even cultivated trees. The surveyors segmented the land into lots, noting bodies of water, soil quality, tree types, terrain, and cultural features such as paths, roads, and cultivated fields.
Riverways (solid line)
The largest concentration of Cherokee improvements occurred along principal streams and rivers and, more specifically, in the fertile lowlands of the Ridge and Valley province in the north and west sections of the territory and along the Chattahoochee River. In nearly all cases, improved lots either bordered a stream or were within a short distance of one, as alluvial soils could be easily worked with tools.
Cherokee Land Lottery of 1832 (cut-out grid)
Following the forced relocation of the Cherokee Nation, their territory was carved into sections and districts with the intent of redistribution. The area, restricted to the Northwest corner of the state of Georgia, included over 6,800 square miles divided into districts, most of which were nine square miles.
Indigenous trailways (dashed line), mainly used by the Cherokee Nation, crisscross the Blue Ridge Mountains and beyond. 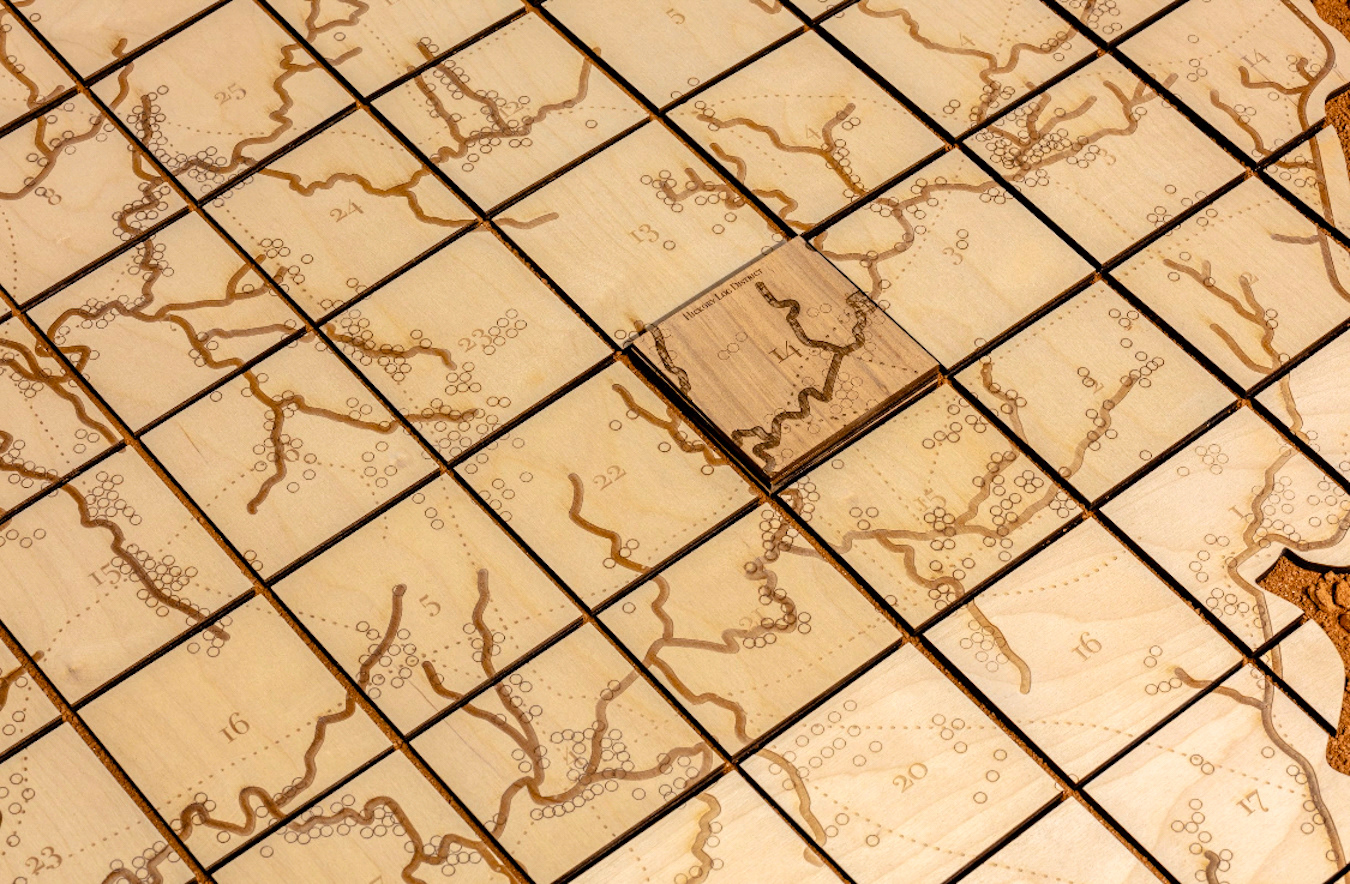 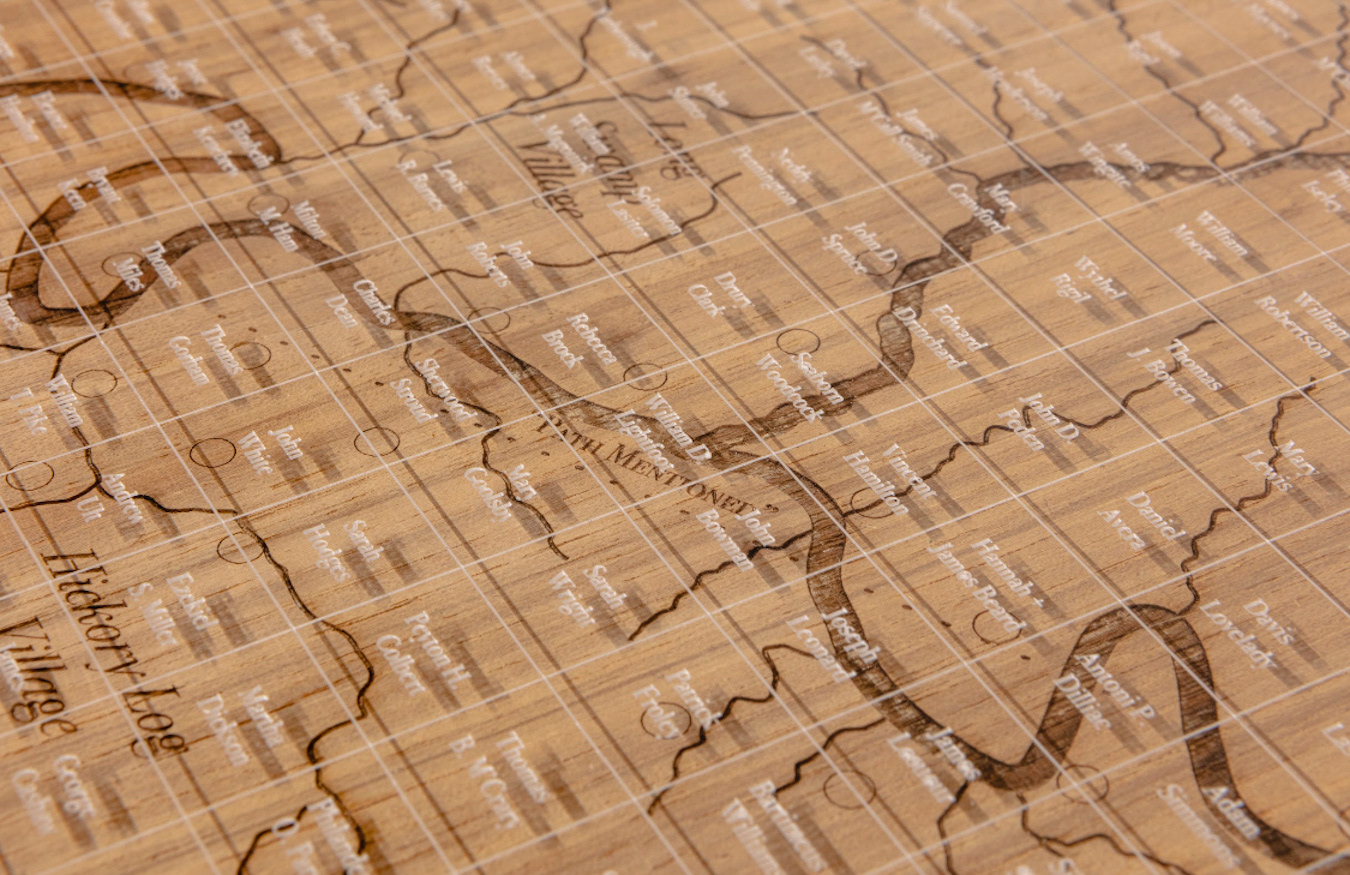 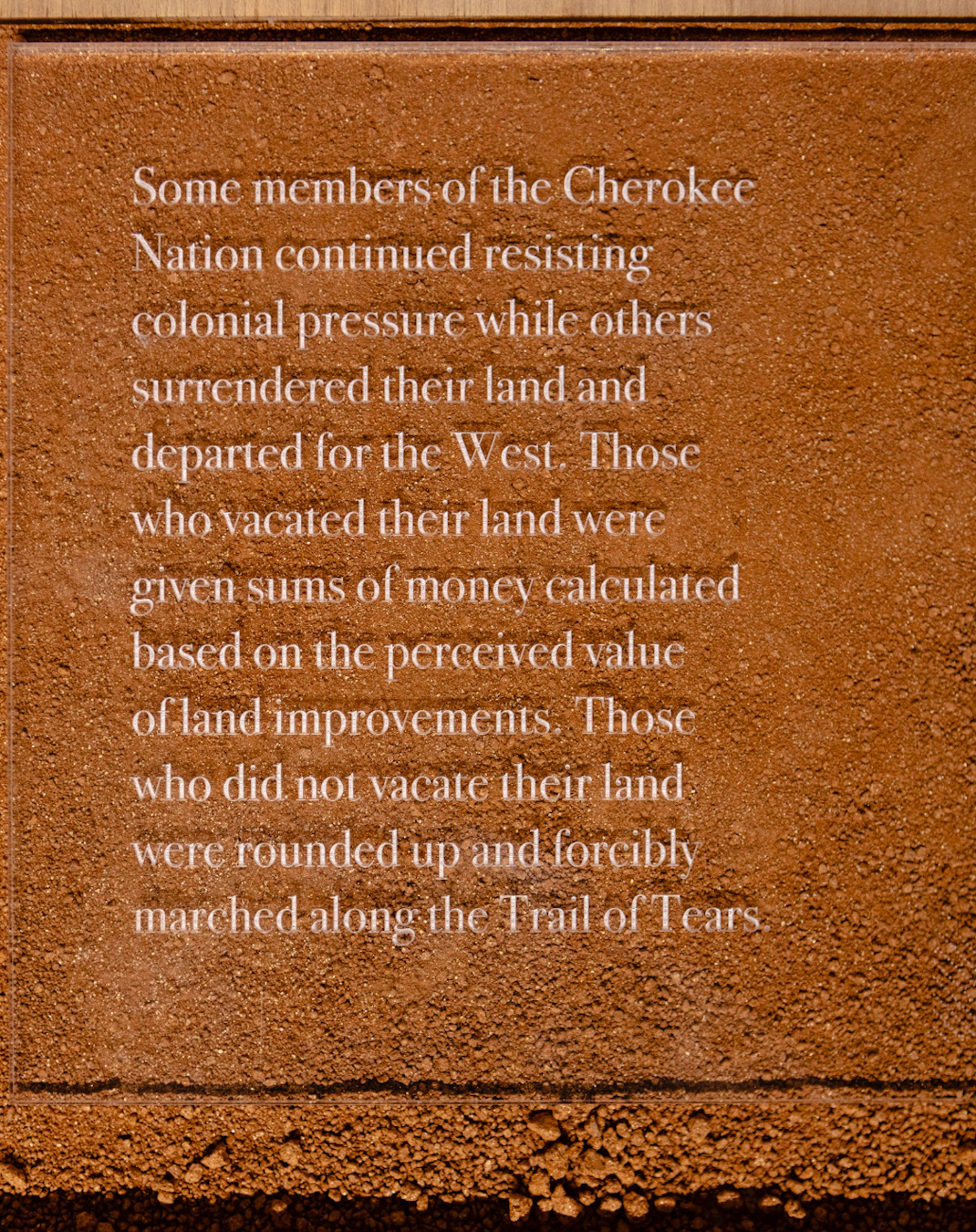 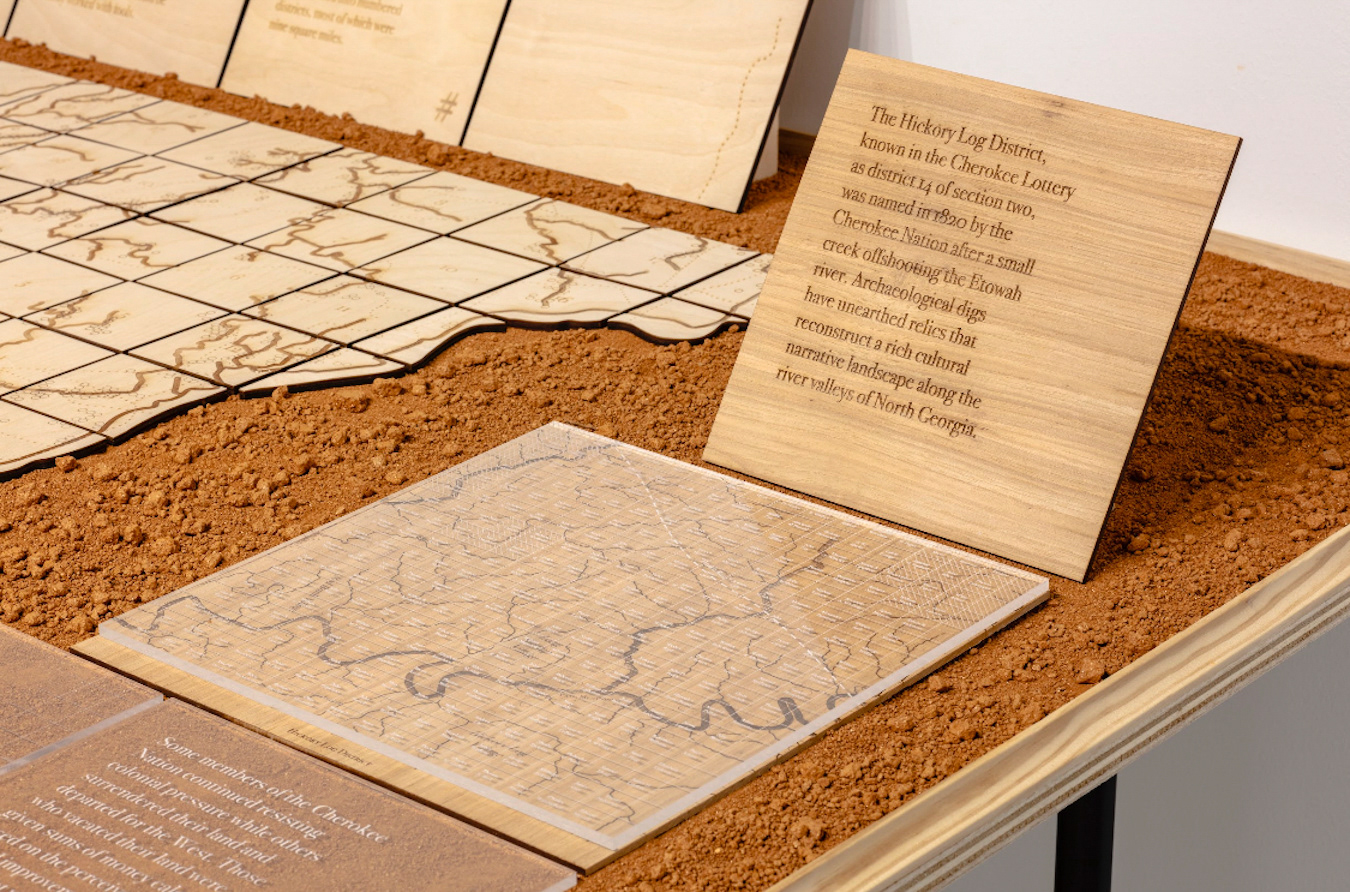 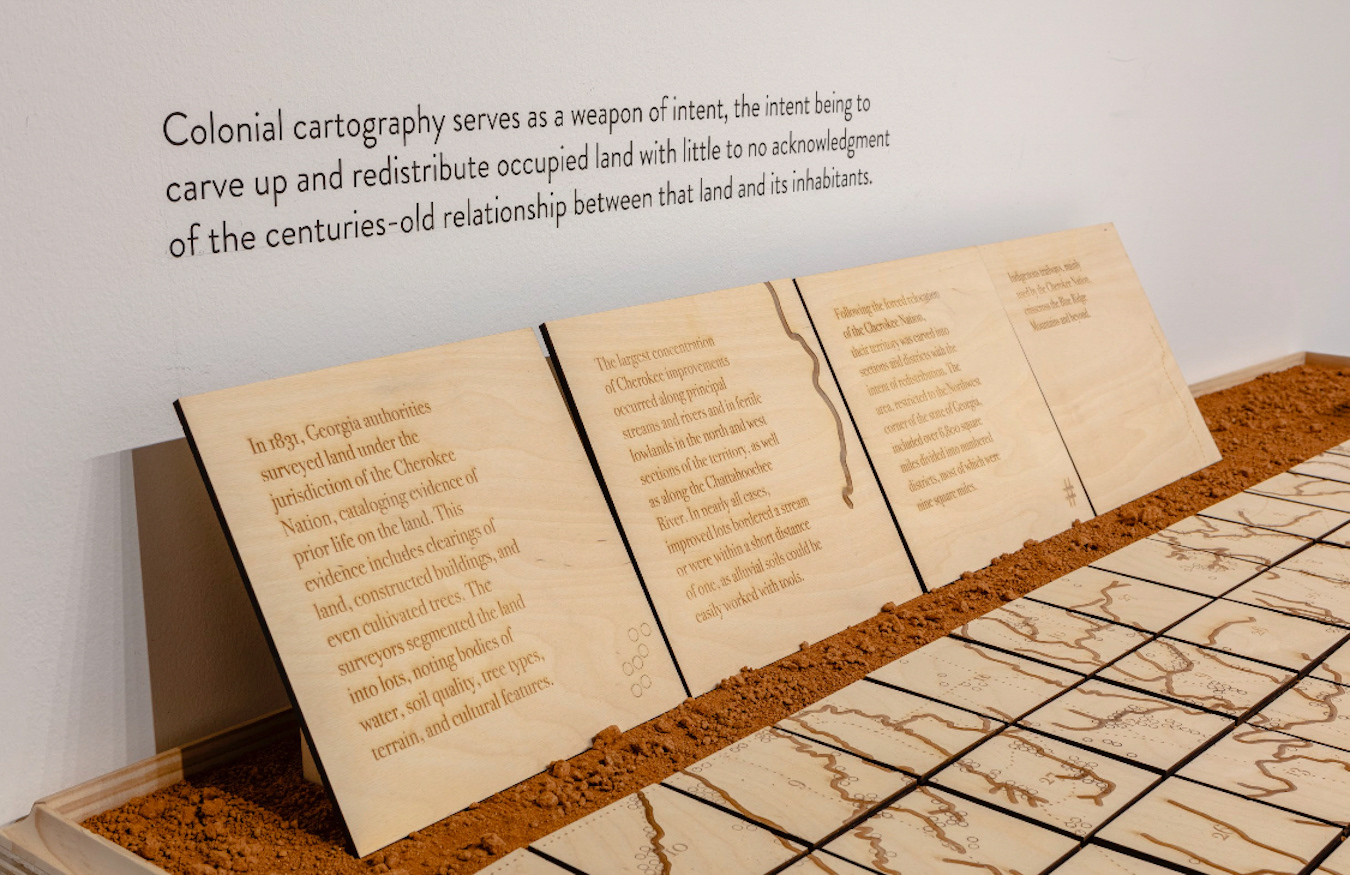 The Hickory Log District (engraved map), known in the Cherokee Lottery as district 14 of section two, was named in 1820 by the Cherokee Nation after a small creek off-shooting the Etowah river. Archaeological digs have unearthed relics that reconstruct a rich cultural narrative landscape along the valleys of North Georgia’s rivers.

Lottery drawers
An acrylic overlay names the settlers who occupied the Hickory Log District after the lottery. Indigenous communities did not view land as something that can be owned, or as property—rather, people belong to the land. The Cherokee Land Lottery of 1832 imposed this concept of land ownership on them.

Valuated Improvements (shaded acrylic lots)
Some members of the Cherokee Nation continued resisting colonial pressure while others surrendered their land and departed for the West. Those who vacated their land were given sums of money calculated based on the perceived value of improvements made to the land that they were giving up. Importantly, this value was determined by colonialists.
For instance, a cluster of three lots, previously owned by William and George Haruage of the Cherokee Nation, included two houses worth $30, nine cleared acres of land worth $45, and two peach trees worth $1. Those who did not vacate their land were rounded up and forcibly marched along what is commonly known as the Trail of Tears. 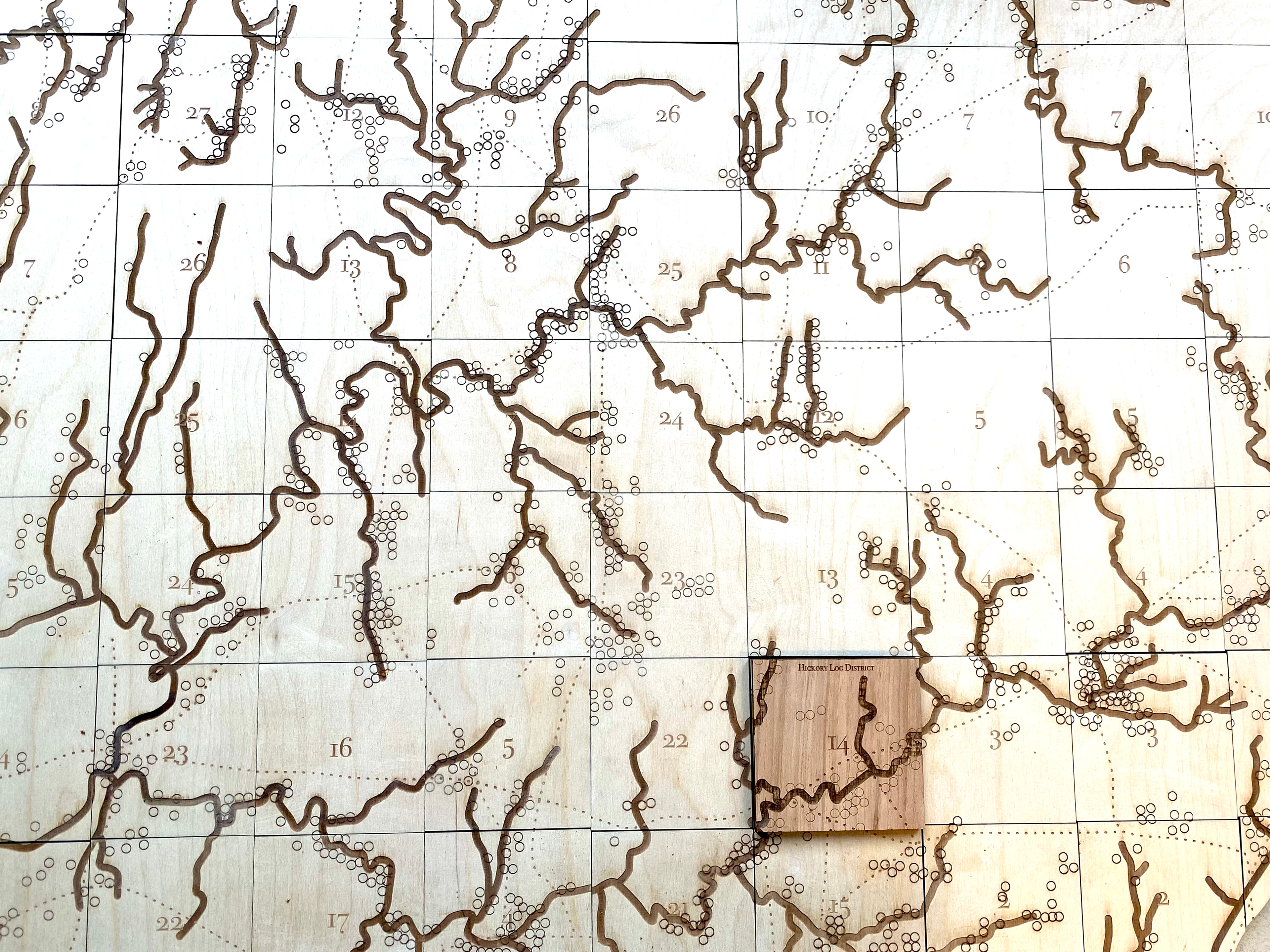 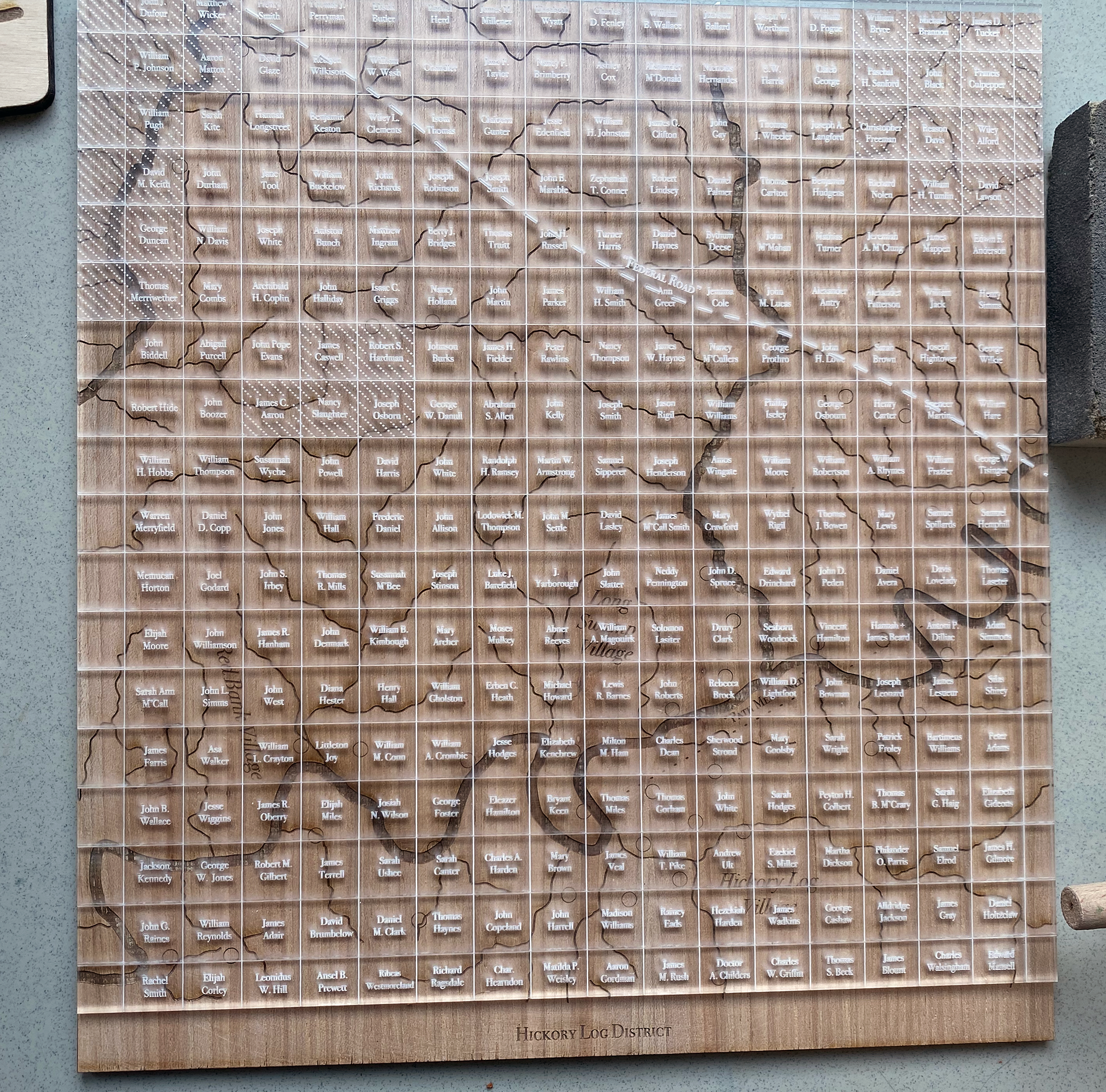 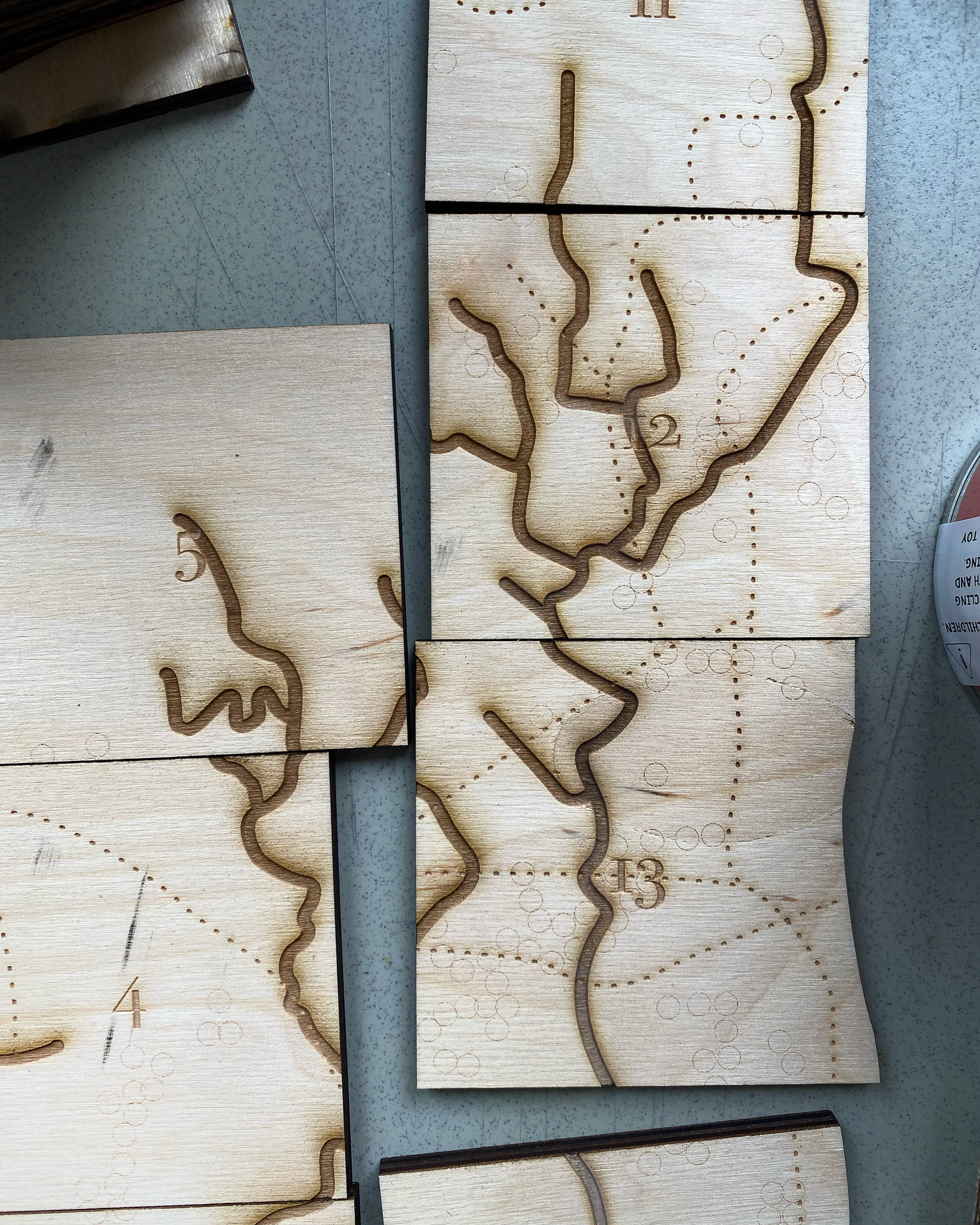 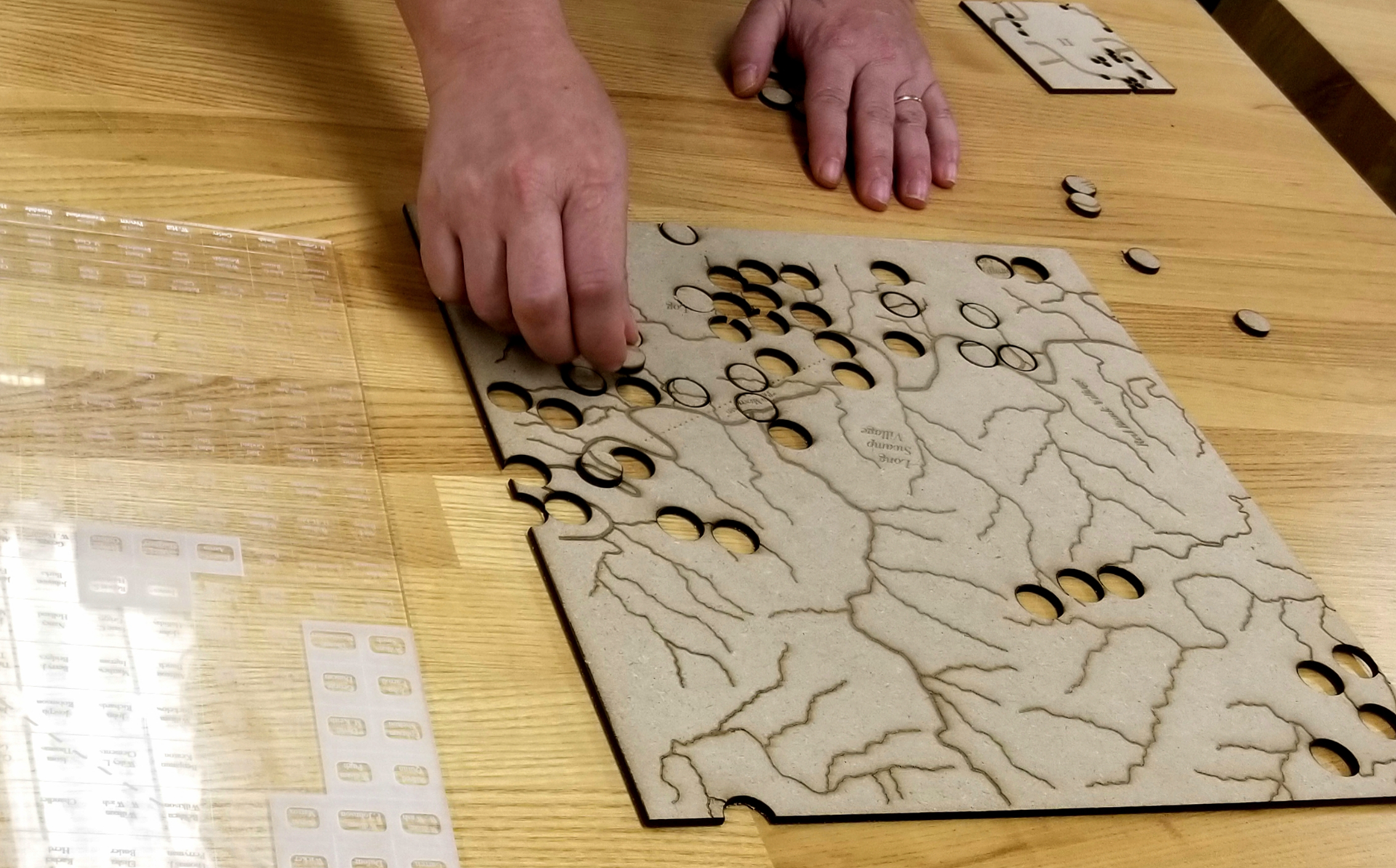 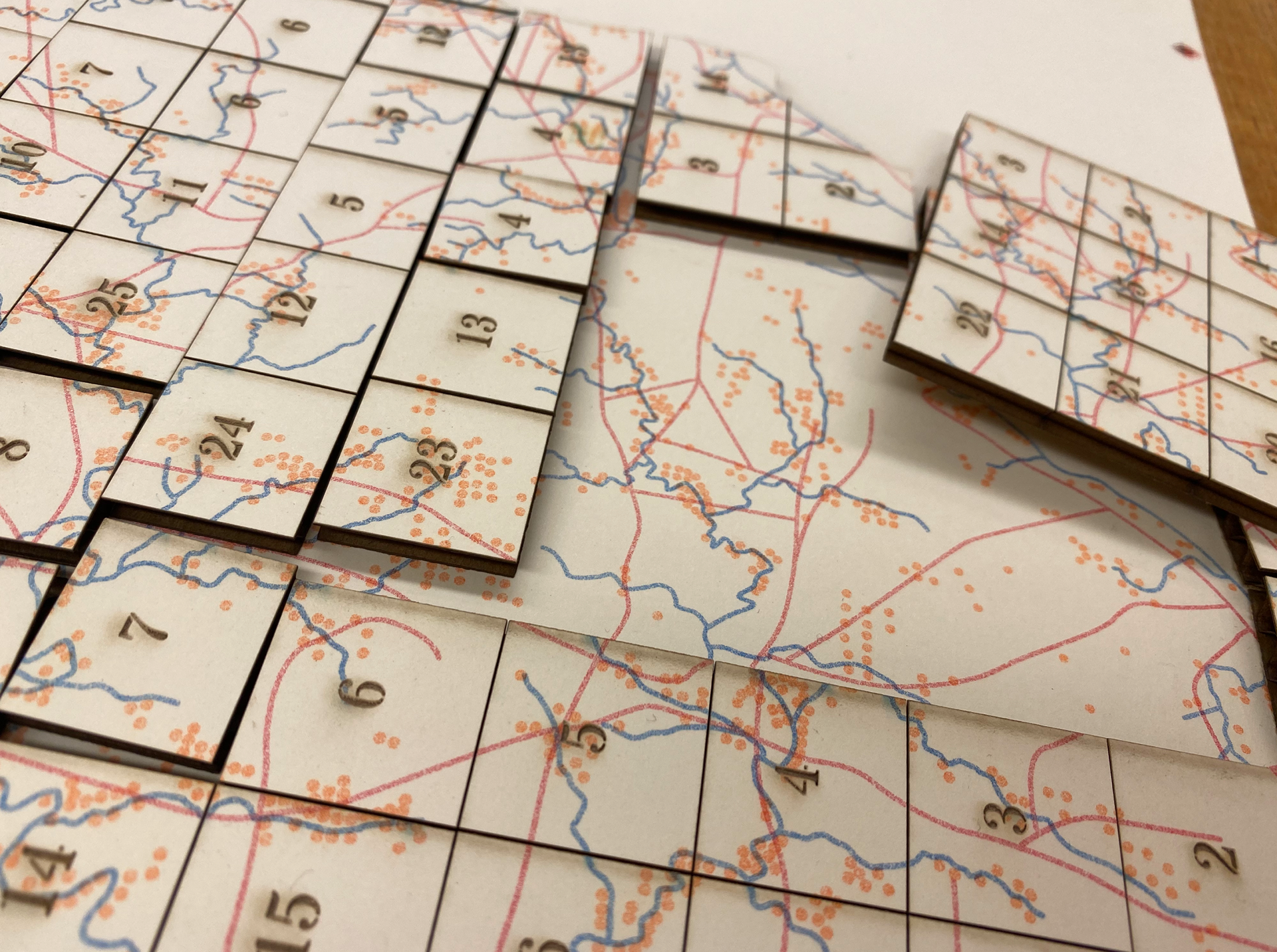 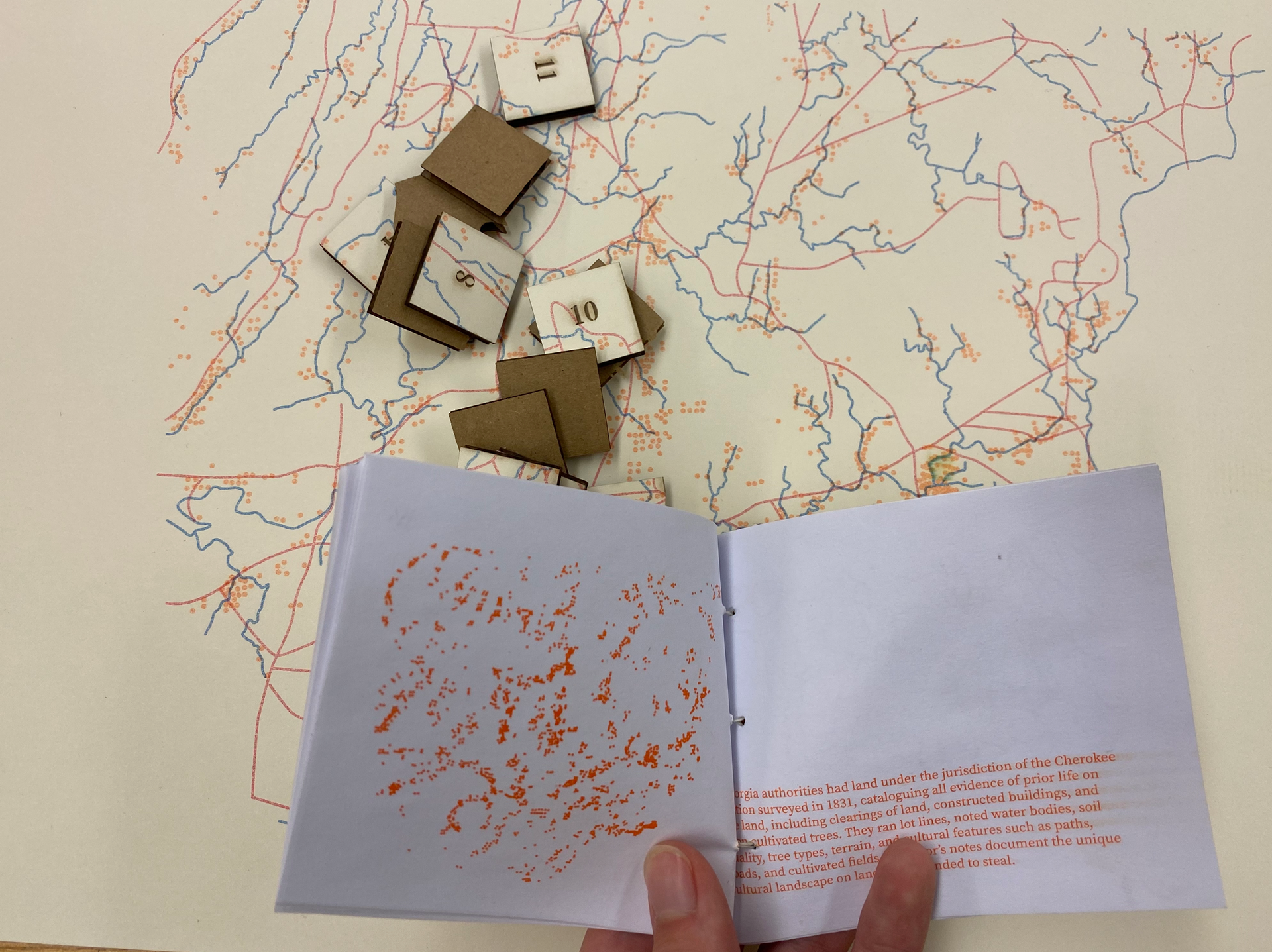 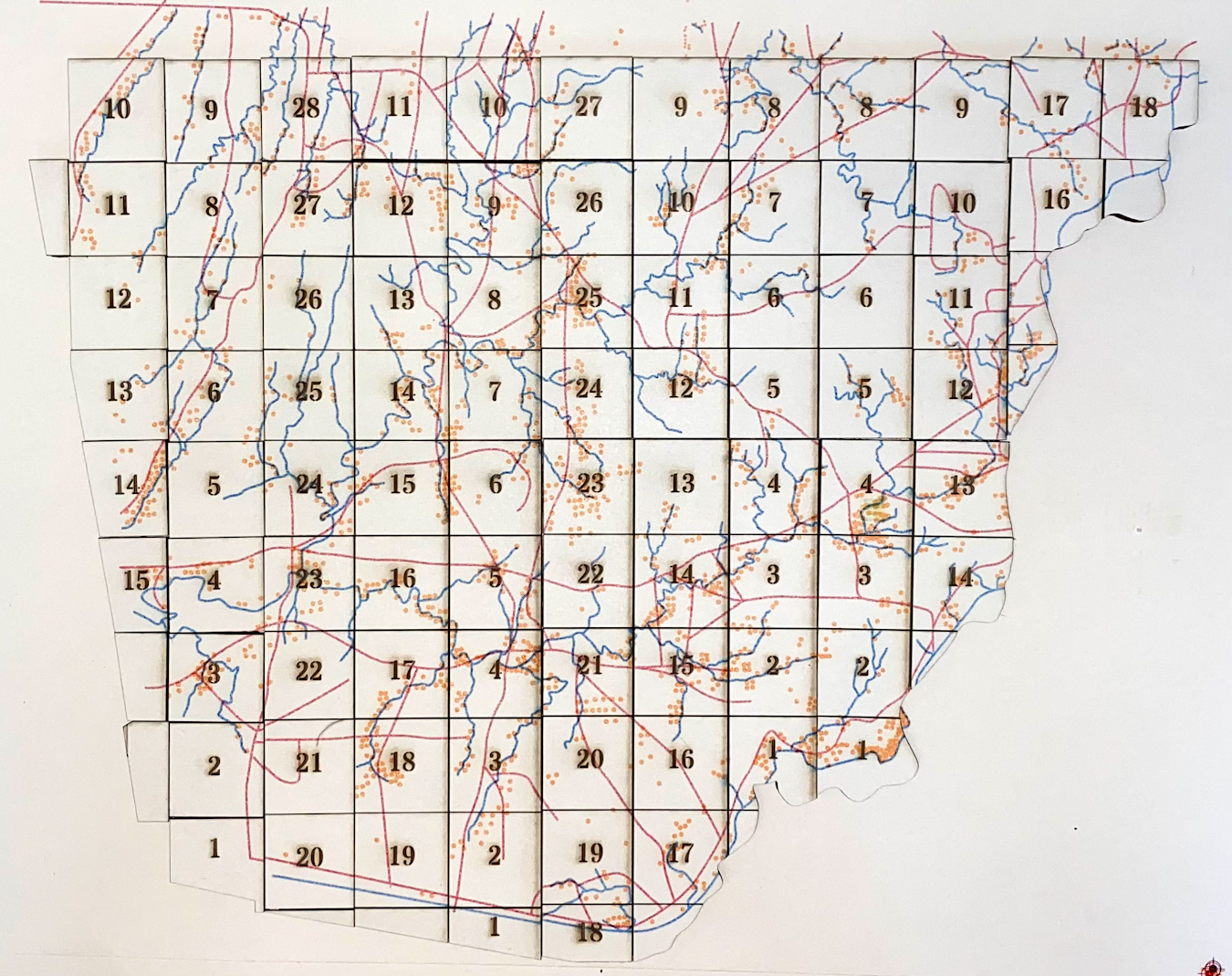